We are having a snowy day today. It has been trying all day and finally sticking to the ground. I doubt it will be able to be measured.  Thanks for all the positive comments on my last couple posts. I try to stay upbeat in my posts, but this last month has been a doozy. Eddy is doing fine. Although it is hard to look at the long incision and staples on his back. Two recovery periods one after another has been difficult. He is a gentle dog and is being brave. And my tooth is all better. It required a new crown (which had been replaced in October) but since it was still in the machine's computer they were able to make another easily and I didn't get charged for the new crown. Christmas was quiet and we were able to video chat with our daughters and their families. Our son meant to video call, and finally did yesterday. He is on his own timeline. Which is fine, nice to spread out the calls. So since I finally finished the wedding quilt it was time to move on to the next problem child.

Problem child #1. My Joe Cunningham quilt from a class I took a couple of years ago. In the summer I finished quilting it and tried to square the quilt. It was way off so I threw it in the corner for time-out. Since I had cleared off my cutting table to trim the wedding quilt I thought I would try again thinking it would fit on the 2 large mats. Nope. It is larger than that. So I pulled out my cardboard cutting mat to see if I could at least draw lines to straighten the top. It barely fits the short way on the mat, but outside the lines. And it ruffles. Probably because of the freeform piecing without paying any attention to bias. I decided I would stay stitch around the cut edge, and then block it. I also has some threads to tuck. It is now ready to go into the washer to soak.  I will try to do that sometime this week.
So on to the next problem child.
#2  I had signed up to do swap blocks with my old guild in CA. Signed up in January. Since I was scheduled to go to CA in March (Empty Spools Seminars and then a week visit with my friend, swap leader) I thought I would shop for a background for the blue and white blocks. Well, obviously my trip was canceled and since we rarely have left town I have not made it to any quilt shops. I really need to get the blocks done and in the mail. So I remembered that I had a UFO from about 1999/2000 that has white on white background. Let's face it, that UFO is never going to be finished. When I pulled it out I found I actually had two blocks sewn and parts cut for at least another block. I will try to make a table runner out of those blocks. This is a hand piecing project.
I had used charm squares for the colors and have a huge stack of them. They were from swaps I did in the late 90's.  So I will let this problem child (number 3) finish off at three blocks and call it good. It is a nice feeling to let a UFO go.

It is a fun block to sew! HST units and four patches. The size we are using for this swap is 8" finished, 8.5" unfinished. Dark blues in the 4 patches and medium blues in the HST. White on white for the background.
It is supposed to be a monthly swap through out the year. I am pretty sure the group has not met in person since March. Anyway, since I live so far away I make a year's worth and send it to Diane (swap leader) and she swaps for me and sends me back my blocks. Everyone has all year to get caught up with the hope all blocks are in by December or January at the latest. This year the number of blocks per month is 10. One for each participant and then one for the "pot". I have won the pot in a previous year (or maybe two). It is a fun way to keep in touch with my pals. I have about 30 finished, so about a fourth of the way there.

I always have a leader project when piecing. I have done this long before I ever heard of Bonnie Hunter. I make little 9-patches out of one and a half inch squares. I cut my scraps into squares and strips. The double 9's are using the little blocks along with 3-1/2" squares from that scrap box. I have about a dozen finished. No idea how big this will eventually end up. I will figure that out when I get closer to a quilt amount of blocks.

I started another MKAL for a shawl. No pics right now, but will have some next time. I did finish the first sock and have half the second sock of the Advent Sock along. Pics next week.

And my pretty pic for the week. Yet another Christmas Cactus blooming! I think this one is my favorite color. 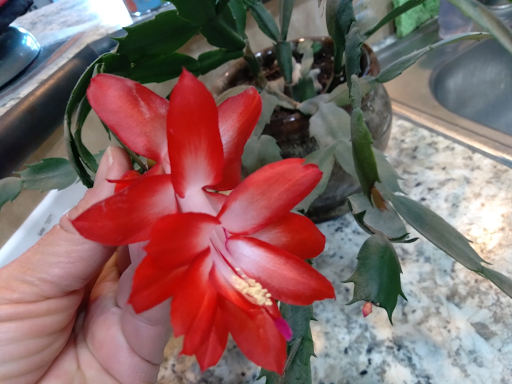 Hoping that everyone has a Happy, Healthy, productive new year!

Thanks for stopping by! I love to hear what you think about my post!

Sylvia
I love knitting, quilting, spinning, reading and cooking. Living in the middle of nowhere with my sweetie and two cute puppy dogs.